You are here: Home / Identity / Shame on You!

A couple weeks ago we were watching a show and one of the characters did something, I felt was terrible, and my immediate response was, “Shame on you!”

I’m sure we’ve all said this hundreds of times, but this time, as it came out of my mouth, I felt guilty. I thought about what I was actually saying, “Shame. I’m going to put shame on you, and shame you for what you just did.” Doesn’t it feel icky when you stop and think about it like that?

Over the last year+ my husband has been working on defeating the enemy of shame. When everything sort of “blew up” for us at the end of 2018, he realized he’d been struggling with shame most of his life, and didn’t even realize how badly it was affecting every aspect of his life. So when the words, “shame on you” came out of my mouth, I thought about my husband and how shame has wrecked so much for him.

Why would I want to put that on someone? Why would I want someone to have to deal with the ugliness shame brings, the torment, the self doubt, the insecurity, the need to hide what’s really going on? Why would any of us want to shame anyone else if we knew that’s what it really meant?

As I thought about it more the Lord brought to mind the scene from The Shack, where Mac is in the cave with Wisdom. At the beginning of the scene she tells him to be the judge,

You spent your whole life judging nearly everyone and everything, their actions and motivations. As if you could even know them. You make snap judgments just by the color of someone’s skin, their clothes, their body language. By all accounts, you’re a well-practiced expert.” (Source)

In the scene Mac isn’t asked about placing shame, he’s asked to judge based on his understanding of right and wrong, but isn’t that the same thing we do when we place shame on someone? We are deciding when someone deserves shame, or when they deserve grace.

The problem with this is we make judgements, and place shame on people, when we have very little understanding of the whole picture. Generally we are self-absorbed and only see a very small view of the picture, when God is the only one who sees the whole picture.

If that’s the case, shouldn’t God be the only one who judges and has the right to place shame on someone? But that’s not who God is, Psalm 147 and 145, paint a very different picture of God,

He gathers up the outcasts and brings them home! He heals the wounds of every shattered heart. He sets all His stars in place, calling them all by their names. How great is our God! There is absolutely nothing His power cannot accomplish and He has infinite understanding of everything.” Psalm 147:2-5 tPt

“You’re so kind and tenderhearted to those who don’t deserve it and so very patient with people who fail you. Your love is like a flooding river overflowing its banks with kindness. God, everyone sees Your goodness, for Your tender love is blended into everything you do.” Psalm 145:8-9 tPt

Our God is one who “gathers up the outcasts,” and the people we shame, and He brings them into His presence. He is the God who heals our broken shattered, shame-filled hearts, and gives us life, hope, restoration and healing.

Please hear my heart, this is not me standing on a soapbox preaching to you, because I have it all together, this is something the Lord has recently, strongly convicted me of, and I’m learning each day.

Unfortunately I’ve had a very real picture of what shame can do to someone, and it has caused a lot of pain in my husband’s life, and in my life. It’s because of that very tangible evidence I almost felt sick after saying, “shame on you” to the character on TV.

When we make that call and place shame on someone else, we are sitting on the judgement seat, just like Mac. We are saying we know that person is deserving of shame, and should suffer the consequences of what that means. But do we really know?

What would happen if, instead of jumping on the judgement seat, we stepped into the greater calling and we had patience for those who let us down? What if our hearts overflowed with kindness, the way God’s heart does for us? How beautiful would it be to live in a world where we loved, instead of shamed one another? 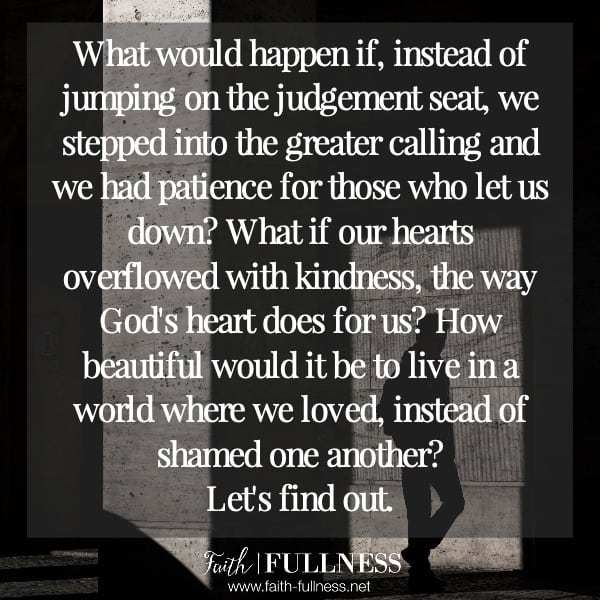 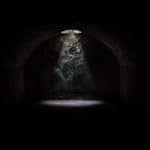