You are here: Home / Faith / Into the Wilderness

I was reading in the book of John the other day and as I read chapter 11, something stirred in me. It has been a couple of days since I read it but I can’t shake these thoughts. In verse 43 Jesus calls out to Lazarus and raises him from the dead, which was an incredible miracle and a testament to God’s power through Jesus (vs. 15). But after Jesus raises Lazarus from the dead “a few went back to inform the Pharisees about what Jesus had done.” (vs. 46). It’s at that time the Pharisees decide that Jesus must die, vs. 53 says, “So from that day on, they were committed to killing Jesus.”

What I keep getting hung up on though is the next verse, it says,

For this reason Jesus no longer went out in public among the Jews. But He went in the wilderness to a village called Ephraim, where he secluded himself with His disciples.” John 11:54

It’s not an incredibly profound verse, it’s not even life-changing, but what I keep seeing is the prophecy of Jesus’ death had been decided on but the timing wasn’t right so Jesus went into hiding.

How many times have there been things prophesied over our lives and when they don’t happen when we think they should, we abandon all hope, assume we heard wrong, or blame God for forgetting us. But what I keep hearing from this verse is that just because something has been spoken, and prophesied out loud, doesn’t mean right then and there is the right timing.

Jesus knew the prophecy had been decided upon, and the timing was drawing near, but He knew it wasn’t the right timing. Jesus wasn’t running away from what had been spoken, He was waiting on His Father for the right timing. In His hiding, He didn’t isolate Himself, He surrounded Himself with His disciples, and I’m sure with a lot of time with His Father.

What are you doing in your waiting period?

Has the Lord prophesied over your life but you have yet to see those things come to pass? Are you frustrated, do you feel like He’s abandoned you?

He hasn’t left you, it’s just not the right timing.

Maybe we’re spending too much of our time being frustrated instead of joining Him in the wilderness.

I can’t tell you how many prophecies I have yet to see come to pass, and I can’t tell you how many times I’ve been frustrated with them and get even more frustrated when people keep confirming them (it makes me CRAZY!). However I’ve decided to not focus on the prophecy anymore—because I know it will come to pass in His perfect timing—instead I’m learning to look for Him in the wilderness.

Each path He leads me down, draws me closer to Him and every new thing I discover about Him teaches me more about myself, and ultimately won’t all those things help me in what He’s calling me to? And even if I never get to see the prophesies fulfilled, isn’t time spent with the Lord better for me then time spent being mad at Him? 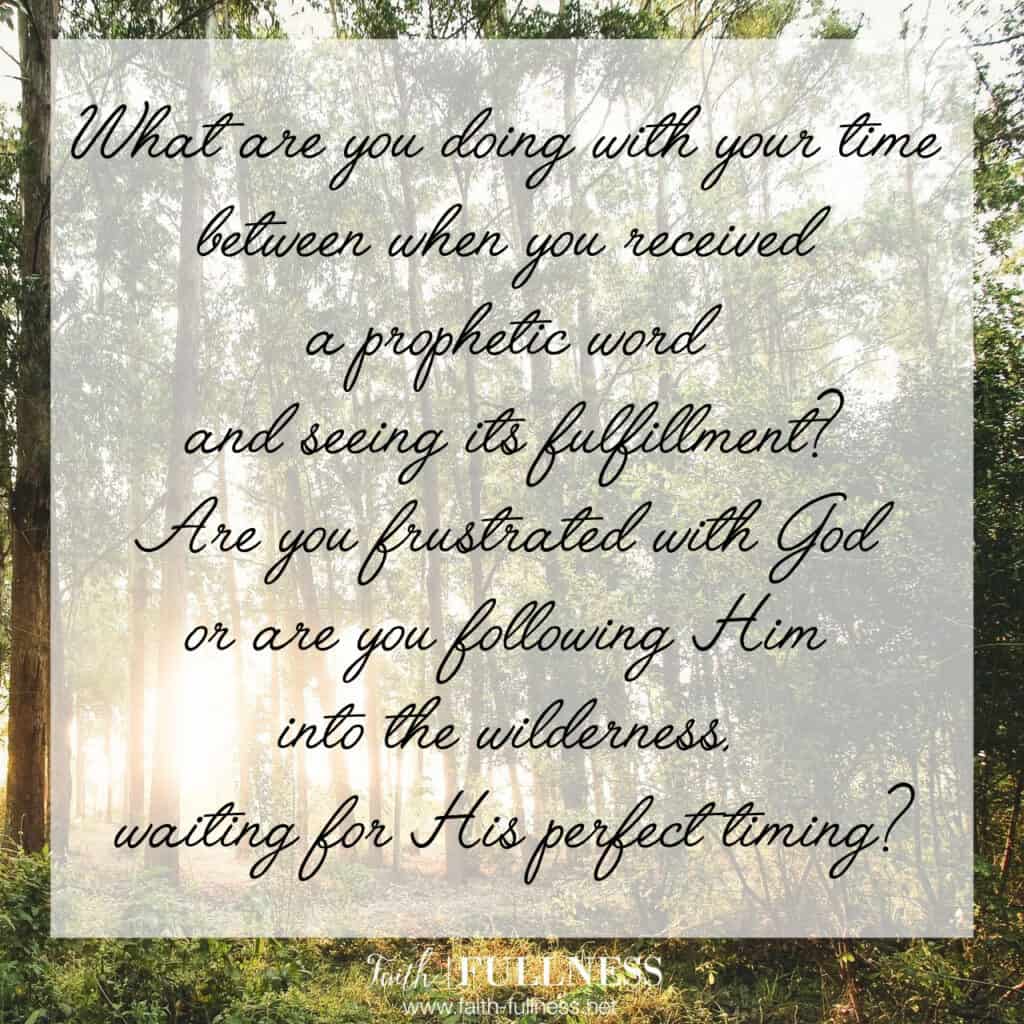