You are here: Home / Identity / A Story of Deliverance – How I was Freed from Bondage

A Story of Deliverance – How I was Freed from Bondage

I’ve never actually written out the story of my deliverance. I’ve told the story countless times but the thought of putting in writing is exciting and a little nerve wracking all at the same time. Today I’m going to put it all out there. This is the story of who I was and how I got free from the bondage of the enemy, to become who God created me to be.

The enemy comes to “steal, kill and destroy” but the Lord comes to save, redeem and restore.

Almost eight years ago I was in a very dark place. I was coming out of the pit of postpartum depression (you can read that story HERE) but I was still very tormented. I was tormented from a life of depression, insecurity and countless other things.

I don’t want to spend too much time talking about my upbringing, but I’ll give you the short version. I had a pretty happy childhood until I was 10, at which time my parents got divorced and everything changed. My parents tried to make it “easy on us” but anyone with divorced parents knows, nothing about a divorce is easy on a kid.

Because of countless issues with my parents – which I won’t go into to protect their privacy – I began struggling. I started believing the lie that “I wasn’t enough”, which lead to insecurity and lots of other issues. 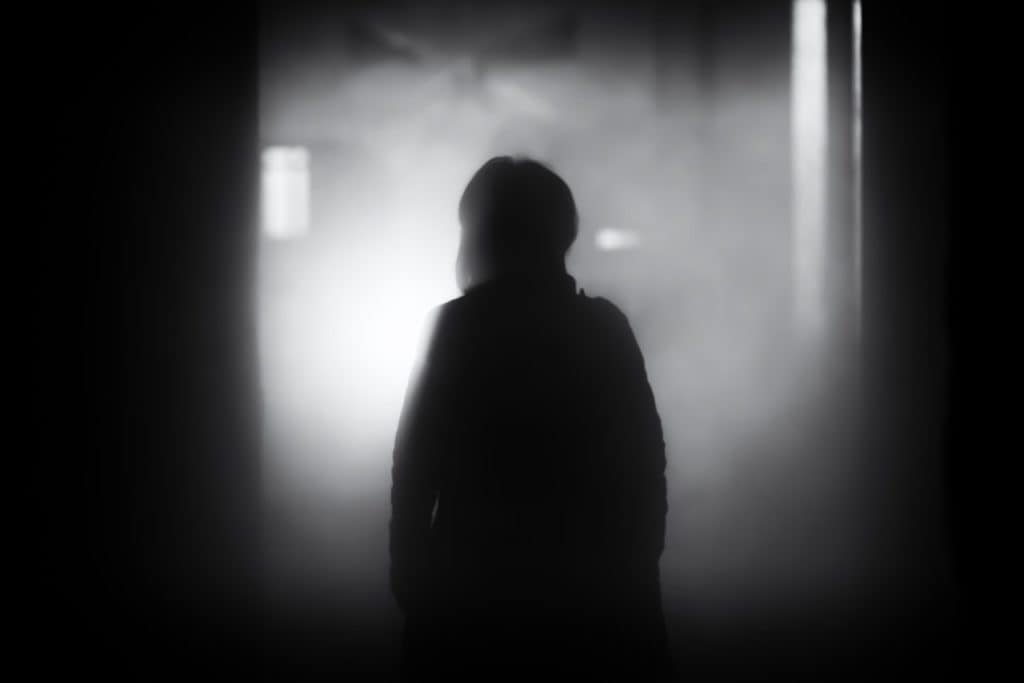 I, unknowingly, allowed depression to come into my life and take over my thought processes. Everything was filtered through a spirit of depression (I know that now but of course I didn’t recognize it at the time), including my identity.

Let me tell you, insecurity and depression are a dangerous mix. When you don’t feel like you’re valued and you hear everything through a filter of depression, it leads you to the spirit of suicide. For years I struggled with suicidal thoughts, allowing the spirit of suicide to tempt me and flirt with the appeal of just checking out and not having to deal with life anymore.

From about 11 years old, until about 20, I was slowly slipping away. I wanted so badly to just feel normal, and to not struggle with all these issues (and more) so in an attempt to be “normal” I started controlling everything around me. I felt that if I could control what was going on around me then it would make me feel better. For the most part it worked, although it made me not always fun to be around, but in my mind, if I was in control and could piss off those around me, then they couldn’t hurt me. Obviously it’s completely flawed logic but it’s what got me through so many painful years – grasping for control as I slowly slipped away. 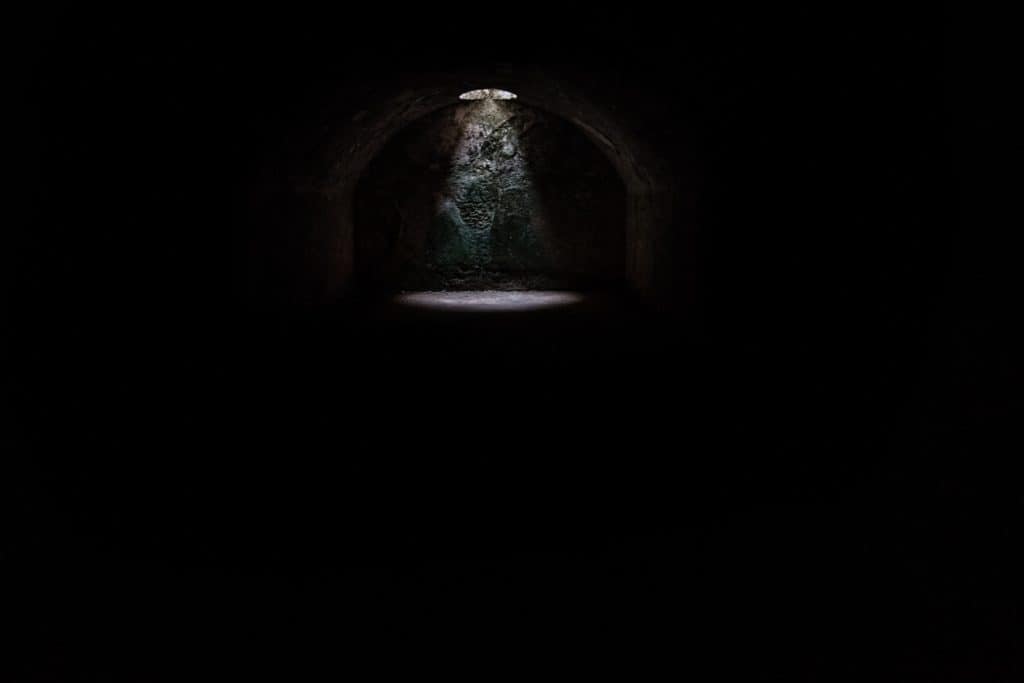 To be honest the only thing that kept me going was the fear of God, and Hell. The countless times I pondered suicide I always got a picture in my mind of me standing at the gates of Heaven and the Lord telling me I couldn’t come in because I had taken a life,

When I turned 21, I made the decision to go to Bethel School of Ministry. I received so much healing and learned so much about myself during those 9 months of school, that it set me on a new path. Not a fully healed path, but a better one than I had been on. I discovered my prophetic gifting – which gave me purpose, I learned how to hear the voice of the Lord more clearly – which made it easier to not listen to the lies, but after 9+ years of damage, there was still a lot to work through.

Fast forward to 28 years old. I was happily married, I had just given birth to a beautiful baby girl, and my old enemy depression showed up.

When I started coming out of the postpartum depression I began meeting with a friend of mine who had experience in inner healing and deliverance. We met multiple times and talked through every detail of my life – my parent’s divorce, my relationships with both my parents, friends, struggles, etc.

It was eye opening to see how my parents’ decisions, choices and personalities had affected me so much. I also started to see the filters I had put up, that I viewed the world through. A lot of healing happened in those meetings and I began to pour over the prophetic words that had been spoken over me in school and slowly figure out who I was – all over again – or maybe for the first time.

In April 2009, a small group of friends and I gathered one evening to pray and finally set me free of the remaining spirits that had tormented me for so many years. We prayed for hours, and I rebuked all sorts of nasty things, but even after hours of prayer, I still didn’t feel 100% free. It was at that point I knew the Lord wanted us to play a song my friend had given me earlier in the week – I Surrender, by Kim Walker-Smith.

As the words started to wash over me I stood up and started worshiping. But when the second verse played, the Lord started speaking.

The thought of surrendering every part of me seemed scary. I had just spent hours getting free of things but I was still holding back, but what? The song continued…

And then it came. Did I really trust the Lord that His ways are “far better than mine”? My life had been turned upside down because of things He’d allowed to happen. I had needed to take control to try to get my life in order but if I really surrendered to Him, then I’d have to give up control.

While the words of the song filled the room I fell to my face. In that moment I told the Lord,

As I repeated these words I cried and cried, harder than I ever had before. But when the song finally ended,

I was an empty vessel ready to be filled back up by my loving Father, a Father who had set me free. My friends and I hung out a little longer and then I left to go home, a new person.

What I’ve learned about freedom is that it’s not easy and it will cost you your life. God sets you free but then He asks you to give your freedom back to Him, and that night I learned why.

I was almost home when I heard a knock. In my mind I looked out the door of my nice, newly cleaned-out room, and I saw control standing there. He said to me, “You need to let me back in.” I quickly replied, “No, I don’t.” And then I heard the words I’ll never forget.

Yes, you do because you don’t know who you are without me.”

He was right. I had no idea what my life was going to look like without operating out of a spirit of control, but my response back to him was,

You’re right, I don’t. But I’m willing to find out what it looks like.”

And with that he left. Of course there have been countless times he’s tried to come back and take over but that night I made the decision that I wanted to always listen to the Lord and follow His path because He knows me better than I’ll ever know myself.

I know the thought of getting rid of everything you’ve always known is terrifying, but I can tell you from experience that it is SO worth it! The enemy is a great deceiver and he’s very convincing, so when he tells you it’s impossible to live without that victim spirit, the spirit of fear, the spirit of depression, or the spirit of control, if feels very real – but the only reality is that he’s a liar. It might seem like he’s trying to protect you, but remember what I said at the beginning,

The enemy comes to “steal, kill and destroy” but the Lord comes to save, redeem and restore.

Allow the Lord to save you, allow Him to rescue you, because I promise you, the process of restoration is a life of freedom. Choose freedom, YOU ARE WORTH IT! 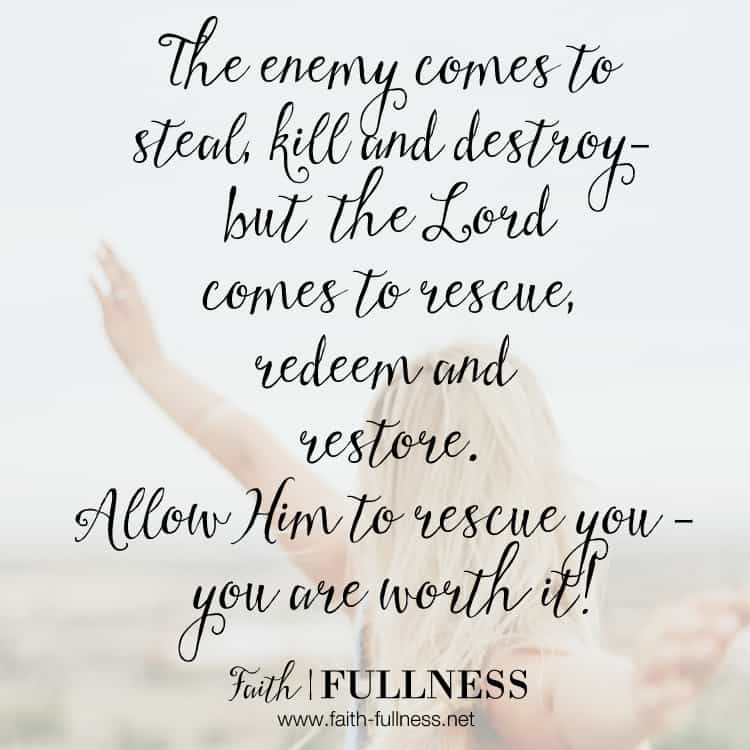 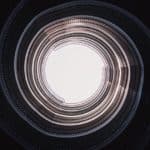 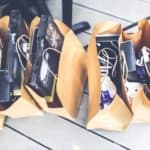